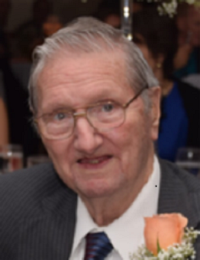 Gene joined the United States Army during the Korean War.  During August 1952, he graduated from the 7th Army’s Non-Commissioned Officer’s Academy.  Sergeant Ruwe was honorably discharged.

He was a member of the the Fraternal Order of Police Lodge 84 and Veteran of Foreign Wars Post 10380.  He had also served in his early years as a volunteer fireman with the Mack Fire Department.

Memorials may be made to Elder High School in his honor.