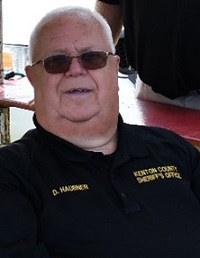 Danny joined the Taylor Mill Police Department as a patrolman about 1973 and served until March 1975.

During January 1976, he joined the Covington Police Department as a Police and Fire Dispatcher.  He was promoted through the ranks to Deputy Director of Communications.

Deputy Director Haubner additionally joined the Kenton County Sheriff’s Office as an unpaid Special Deputy Haubner during May 1998.  Throughout the years he was always willing to help out whenever needed.  He eventually took it upon himself to coordinate all the special deputies, making sure there were enough workers for various annual functions.

During March 2013, he left the Clerk’s Office and, still an unpaid Kenton County Special Deputy, he began inspecting vehicles for them.  By December 2021, he had served his city and county more than 48 years.

Memorials are suggested to Holy Cross Church or the Covington Fraternal Order of Police.