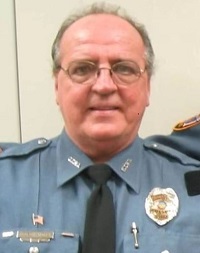 After returning home, he was employed in general officer work and, during 1969, married Sherryl Dianne Tye.

Having received law enforcement officer training in New Jersey, on August 1, 1974, Don joined the Cleves Police Department as a Patrolman and one of only two fulltime officers, including Police Chief Rininger.  Later, he was promoted to Sergeant.

Sergeant Hatmaker left Cleves on October 28, 1978 and, on January 2, 1979 joined the Green Township Police Department as a Police Officer.  During his tenure, “Hat” served as a patrol officer, narcotics officer (in DART), detective in the Criminal Investigation Section, and the first School Resource Officer at Diamond Oaks.  He also led the department’s first Citizen Police Academy.  He was named Police Officer of the Year in 1987.  During December 2001, he was promoted to Corporal/Field Supervisor.  Corporal Hatmaker retired July 30, 2004 with 34 years of service to his country and two communities and multiple letters of appreciation and/or commendation; including from police chiefs of Delhi, Cheviot, and Cincinnati, the Hamilton County Sheriff’s Office, multiple banks, schools, businesses, and citizens, and WLW Radio.

Visitation will be held 6 p.m. to 8 p.m. on Wednesday, December 8, 2021 at Newcomer Funeral Home, Northwest Chapel at 7830 Hamilton Avenue in Mt. Healthy.  A funeral service will be held at 11 a.m. on Thursday, December 9, 2021 at the funeral home.  Burial will follow with military and police honors at Butler County Memorial Park in Hamilton, Ohio.

Memorials may be made to the Community Missionary Baptist Church, 4545 Forest Avenue, Norwood, OH 45212.