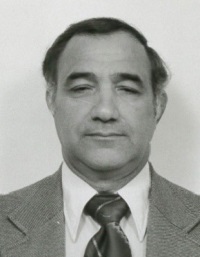 Dan was born on August 7, 1928 in Hartford, Connecticut, the second of five born to Italian immigrant Francis and Marie (Cappa) Cella.  By 1930 the family was living at 646 Seventh Street in Hamilton and by 1940 at 215 Mulberry Street in Cincinnati.  He attended Hughes High School from 1943 to 1946.

On June 16, 1946, Dan joined the United States Naval Reserve.  He was honorably discharged with a Victory Medal.

Patrolman Cella was among the first group ever to be promoted to the new rank of Police Specialist on February 27, 1966.  He was issued Badge PS-118.  On March 7, 1971 Specialist Cella transferred to Criminal Investigation Section, Checks and Documents Squad (222 East Central Parkway).  Specialist Cella retired August 1, 1981 with 28 years of service and fourteen letters of appreciation and/or commendation including one each from the police chief, United States Postal Inspector, and City Manager.

He was also a life member of the Fraternal Order of Police, Queen City Lodge 69.

On Monday, November 23, 2020, just prior to 11 a.m., FOP services were conducted by a few members, due to COVID, outside the Sacred Heart Church at 400 Nelles Road in Fairfield.  Then the family celebrated a Mass of Christian Burial inside the church.  Graveside services followed at the Gate of Heaven Cemetery.