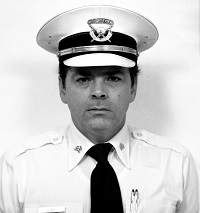 Also in June 1959, he began work as a stockman at Diamond Gardner in Lockland.  During October 1959, he took a position as a stock clerk at Kroger’s in White Oak until April 1962.

While working at Kroger’s, during October 1960, Butch joined the United States Marine Corps Reserves and served six months active duty.  He was honorably discharged about 1966.

On January 29, 1979, he was promoted to Sergeant, issued Badge S-93, and reassigned to District 4.  On January 23, 1983 Sergeant Guy transferred to District 3 and took over the Mini-Tac Covert Unit.  Little more than a year later, he transferred to the Homicide Unit and, among other duties, coordinated investigations of robberies of financial institutions.  During 1988, Sergeant Guy headed up the successful task force established to identify and capture the Senior Stalker responsible for robberies of as many as thirty elderly people.  On April 8, 1995 Sergeant Guy retired with 33 years of service in the Police Division and 29 letters of appreciation and/or commendation.

During 1974, Specialist Guy began working additionally as a night clerk at the Hamilton County Coroner’s Office.  Upon retirement in 1995, he took over as Chief Night Clerk.  He resigned from that position in 2012 after 52 years of service to his country, city, and county.

Sergeant Guy fought deteriorating eyesight and hearing for years.  About 2015, he began another battle with Parkinson’s Disease.  He died peacefully at home surrounded by loving family on February 22, 2020, just weeks short of his 80th birthday.

Visitation will be held on Friday, February 28, 2020 from 5 to 8 p.m. at Mihovk-Rosanaker Funeral Home at 5527 Cheviot Road near North Bend Road.  .  A FOP service will be held at 7:45 p.m.  A Mass of Christian Burial will be celebrated on Saturday, February 29, 2020 at 10 a.m. at Little Flower Catholic Church at 5560 Kirby Avenue.  A reception will be held immediately following at the Green Township Senior Center at 3620 Epley.

Memorials may be made to the Greater Cincinnati Police Museum at 308 Reading Road, Cincinnati, OH 45202 or Hospice Cincinnati.