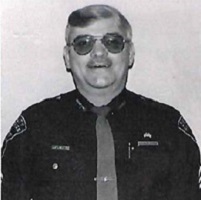 George was born September 1, 1935 in Pittsburgh, Pennsylvania to Charles and Ruth (Shields) Piper.

George joined the United States Army and served in Korea.

George joined the Hamilton County Sheriff’s Office on December 21, 1967 as a Deputy Sheriff and served in the Patrol Division.  He was promoted to Sergeant on May 31, 1973.  Sergeant Piper was reassigned as Range Master on June 30, 1980, then Training Officer on October 30, 1983.  On August 1, 1988, he transferred to Sycamore Township District 3 as the Officer in Charge.  He was reassigned to Patrol Headquarters during April 1990.  Sergeant Piper retired on May 30, 1990 with more than 25 years of service to his country and county.

Memorial contributions may be sent to Hospice of Cincinnati.