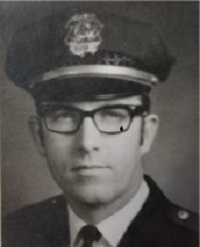 After high school, Louis joined the United States Navy during the Korean War and served most of his tour on the Parris Island Marine Corps base.

Louis joined the Hamilton Police Department on August 23, 1954 and issued Badge 69.  Patrolman Metcalfe retired September 30, 1984 with 33 years of service to his country and community.

On November 6, 2020, Hamilton Police Chief Craig R. Bucheit ordered a seven-day mourning period effective until November 12, 2020, during which all Hamilton officers will drape their badges with mourning ribbons.

At 1:30 p.m. on November 20, 2020, a military ceremony will be held at the Bushnell National Cemetery Ceremonial Assembly Area in Bushnell, Florida.