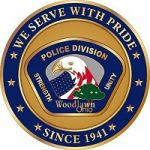 We believe Dave was born September 17, 1951 to Rennie William “Bill” and Violet Rose (Sefton) Hazelwood and that he married Deborah Lynn Ward on June 17, 1972.

Dave joined the Woodlawn Police Department on March 1, 1974.   He was promoted to Sergeant in 1978.  By 1996, he had been promoted to Lieutenant and was Acting Police Chief at least once between November 1996 and February 1997.  Lieutenant Hazelwood retired on July 1, 1999 with 25 years of service.

He is survived by his wife of almost 48 years, Deborah Lynn (Ward) Hazelwood, at least three children, and grandchildren.

Due to the COVID-19 pandemic, his funeral services will be private.

© All rights are reserved to LT Stephen R. Kramer RET and the Greater Cincinnati Police Museum